[/fusion_text][/fusion_builder_column][fusion_builder_column type=”1_2″ layout=”1_2″ last=”false” spacing=”yes” center_content=”no” hide_on_mobile=”no” background_color=”” background_image=”” background_repeat=”no-repeat” background_position=”left top” border_color=”” border_style=”solid” padding_top=”” padding_right=”” padding_bottom=”” padding_left=”” margin_top=”” margin_bottom=”” animation_type=”” animation_direction=”” animation_speed=”0.1″ class=”” id=”” border_sizes_undefined=”0px” first=”true” spacing_right=”2%” min_height=”” hover_type=”none” link=”” border_position=”all”][fusion_text]“An Organizational meeting of the Ladies’ Guild of St. Mark’s Church was held in the home of Mrs. H. Parker on April 15, 1953. Rev. Inns opened the meeting with a prayer and then spoke a few words of advice to help in the organizing of the Guild. A motion was made that we form a Ladies’ Guild. Officers were appointed: President – Mrs. H. Parker; Vice President – Mrs. L. Ellis; Secretary – Mrs. K. Jones and Treasurer – Mrs. D. Spiece. Mrs. Parker discussed the coming of the Bishop for the dedication of the church on Thurs. Apr.23. It was decided to have a reception in the church basement: coffee, sandwiches and cookies to be served. It was planned to have the meetings in the church basement if permission is granted by the board of management. A membership fee of 50¢ a year was set with a silver collection to be taken at each meeting. There were fourteen members present. It was decided to have a simple lunch after the meetings. The meeting closed with prayer by Rev. Inns.”

During the early years, the members took turns cleaning the little, white church situated at the corner of Evelyn and Albert Streets. They bought linoleum, curtains, a stove, dishes and many other items needed to furnish the kitchen and basement. They also took care of the Nursery Class and other children’s programmes. As the social life of most parishioners centred on church activities, there were many Teas, Strawberry Socials, Rummage Sales, Games Nights, Square Dances, Euchre Parties, Bazaars and Dances. The Ladies’ Guild helped pay for the refrigerator and stove for the Rectory and later a Duplicator- needed by the Church to get out notices. At the meetings, in addition to dues, all took part in “Penny Drill”, where any pennies that they had in their purses were put into a social fund.

Fund raising has been a part of the Guild since its beginning. Every spring, a Garden Party was held on the church property or the Rectory lawn to raise money to keep the parish funds “in the black” during the summer months. All members in any organization of the church were expected to help by manning booths with hot dogs, soft drinks, ice cream, a Fish Pond, Home Baking and a Country Store.

Guild members also made and embroidered pillow cases, aprons, mittens and other items at home to be sold to raise funds. They sold greeting cards and hand lotion. There were many times that the Ladies’ Guild was asked to help the church pay bills. The members worked very hard to help St. Mark’s grow.

During the early 1960’s, as the area developed, it became apparent that the little building was too small for the growing number of worshippers, especially since it needed a lot of repairs. Plans were made to build a new church. As the lot was quite small, another area was found to accommodate a larger building with more parking.

The first service in the new building at 155 Memorial Drive was held on November 28, 1965. The church was dedicated by the Rt. Rev. George Luxton on December 8, 1965. The Guild chose to give the pulpit as its gift to the church.

As the area grew and St. Mark’s continued to flourish, the members of the Ladies’ Guild continued to find different ways to raise funds. At each meeting, homemade rolls made by Elizabeth Hall were sold and the money donated along with “Penny Roll” and dues. Similar activities as held in the early years continued. With more room in the “new” church, first with St. Mark’s Hall and later in 1979 with the addition of Munro Hall, Fashion Shows, Hairdressing Shows and cooking demonstrations was another way to raise funds. Members catered to weddings and other banquets on many occasions.

Eventually the Garden Party became the “Spring Fling”, with added features of games, Grandma’s Attic, a Craft Sale and an auction, still a way to provide funds to help the parish in the summer and to foster fellowship among all the church members. 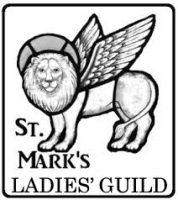 [/fusion_imageframe]Throughout the years, it has been through the generosity and support of the parish members that the Guild has been able to make these contributions to St. Mark’s and the community. Whenever the need arises, one of the strengths of our parish has been to rally around the church and make sure any shortfalls are covered.

Fellowship has always been an important part of the Guild’s programme. Members have a bond with one another and help other members where they can. We have always enjoyed either pot-lucks or meals out at Christmastime and the end of the season.

Over the years, many interesting speakers have visited the Guild. Some subjects have been: Cosmetics, Skin Care, Interior Design, fashions, information about diamonds, Student Loans and Bursaries, wigs, Fire Prevention, care of wooden furniture, cake decorating, fancy sandwiches, gardening, flower arranging, food shopping and Canada’s Food Guide. Teachers have told us of working with handicapped students. We have participated in Chinese Auctions, Line Dancing and Fun Nights where we have enjoyed games and ‘a rousing game of Court Whist’. Members have travelled around the world as our guests have told us of their travels.

Our meetings have usually included devotions to strengthen us. After a business meeting and speaker, most of our evening meetings have ended with lunch being served.

The Ladies’ Guild has contributed to outside charities on behalf of the parish. St. Monica House in Waterloo, the Canadian Bible Society, Huron College and Nova Vita are but a few of the organizations who have benefited from our gifts.

Our members have been the representatives for the World Day of Prayer, both when services are held at St. Mark’s or in neighbouring churches.

During the 1980’s our ladies worked hard on “Magic of Christmas” Bazaars, sewing and making crafts throughout the year, and cooking and baking to make them a success. Members of the parish helped with the “Bag It” programme, where we asked parishioners to also knit, sew, prepare a craft or Christmas decoration and add their baking, cooking and preserves to the members’ contributions.

As society changed and more women started working outside the home, fewer church members were able to take time away from their families to put on as many activities.

St. Mark’s grew again in 1999 with the addition of a very versatile chancel, a larger Sacristy, a lounge and offices. The new worship   area was dedicated on December 5, by the Most Rev. Percy O’Driscoll.

Recently a number of young retirees and others have added energy and enthusiasm to allow more activities to our programme. We have had fun baking pies to sell at the Holly Jolly Faire and provided personnel for Bake Sales at other parish events.

More and more families are asking us to cater to receptions after Funerals or Memorial services. We consider it an honour to assist these families in their time of need. We rely on the generosity of members of the parish to help us by providing food for these receptions. We cater to receptions after Confirmation Services and any other times of celebration in our parish. We also cater to Deanery events when representatives from other churches meet at St. Mark’s. All seem to appreciate the hospitality we give.